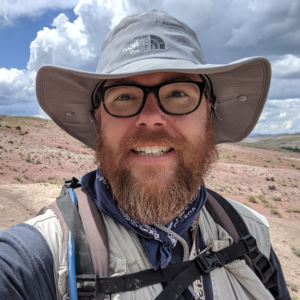 I am a vertebrate paleontologist specializing in Triassic-aged rocks of the Rocky Mountain West (252-201 million years ago). I joined the UW Geology Museum team as a research scientist after completing my PhD at UW-Madison’s Department of Geoscience in 2012. Broadly speaking, my research combines the study of ancient bones, trackways, and soils to build a picture of what ecosystems looked like 230 million years ago — when the first mammals, turtles, crocodiles, lizards, and dinosaurs evolved. Since becoming a member of the museum team, my students and I have made several exciting discoveries including: the oldest known turtle tracks in the world, two mass-death-assemblages of Late Triassic amphibians, several new Late Triassic taxa, and the oldest dinosaur tracks in Wyoming. My current research continues to focuses on regional stratigraphic correlation and depositional ages of early-Late Triassic units throughout the region (WY, northeastern UT, and northwestern CO). New fossiliferous localities and radioisotopic dates are informing our understanding of the upper Chugwater Group (Popo Agie, Jelm, and Crow Mountain formations), highlighting the importance of these understudied strata.